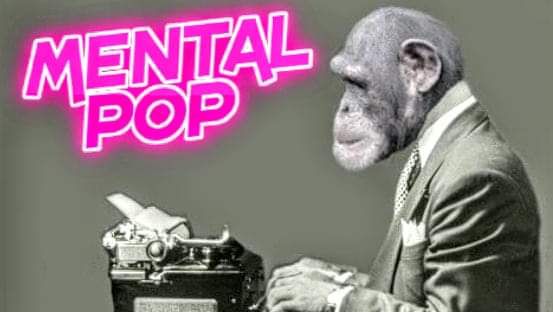 Hello interdimensional travelers from all wavelengths and frequencies, to the new MENTAL POP blog and podcast page at www.mentalpop.space ! I know, how utterly exciting! For those who aren't aware, this podcast, until recently, was known as CONSPIRAPORN and was associated with a now defunct Facebook page which was deleted for BS reasons of "community standard violations". I started a new FB page which you can find at MENTALPOP31, and am trying to, once again, build up a little community.

I'm going to try and keep these blog posts short and to the point. I guess I would encourage those who might find themselves here to check out previous episodes from the last few months, including: THE 420 SPECTACULAR which was all about the origin of ancient cave art, prehistoric shamanism, and psychedelics. THE UFO SPECIAL which covered dozens of UFO cases and reports from the late 19th century into the 21st century. POINT BLANK which was all about cosmic evolution and the life and death cycles of black holes. THEMES OF SUPERNATURAL HORROR in HISTORY PARTS 1, 2, 3, and 4 which was six hours worth of nothing but horror and the supernatural from 6000BC all the way into the year 2021. And THE COVID19 RUNDOWN which was 2 1/2 hours of nothing but alternative information and valid questions regarding Covid19.

And of course, our last episode which was all about AMERICAN MADE EUGENICS and the movement which has been virtually written out of US history books. So, all of this and much, much more to come as I'm now finally starting to take this podcast and MENTAL POP somewhat seriously moving forward. I hope you'll check out previous episodes, stay tuned for new ones, and feel free to give a shout out, drop a line, leave some feedback and critiques, or submit some ideas for future episodes. I'm just a dude who records a podcast on his phone, but I think there are some good episodes in here and hope you'll enjoy. The next episode is due this coming week and topics will include more discussion on Covid19, The Georgia Guidestones, and an interview with the purveyor of the GOLD POLITICAL MEMES page on Facebook. Until then!