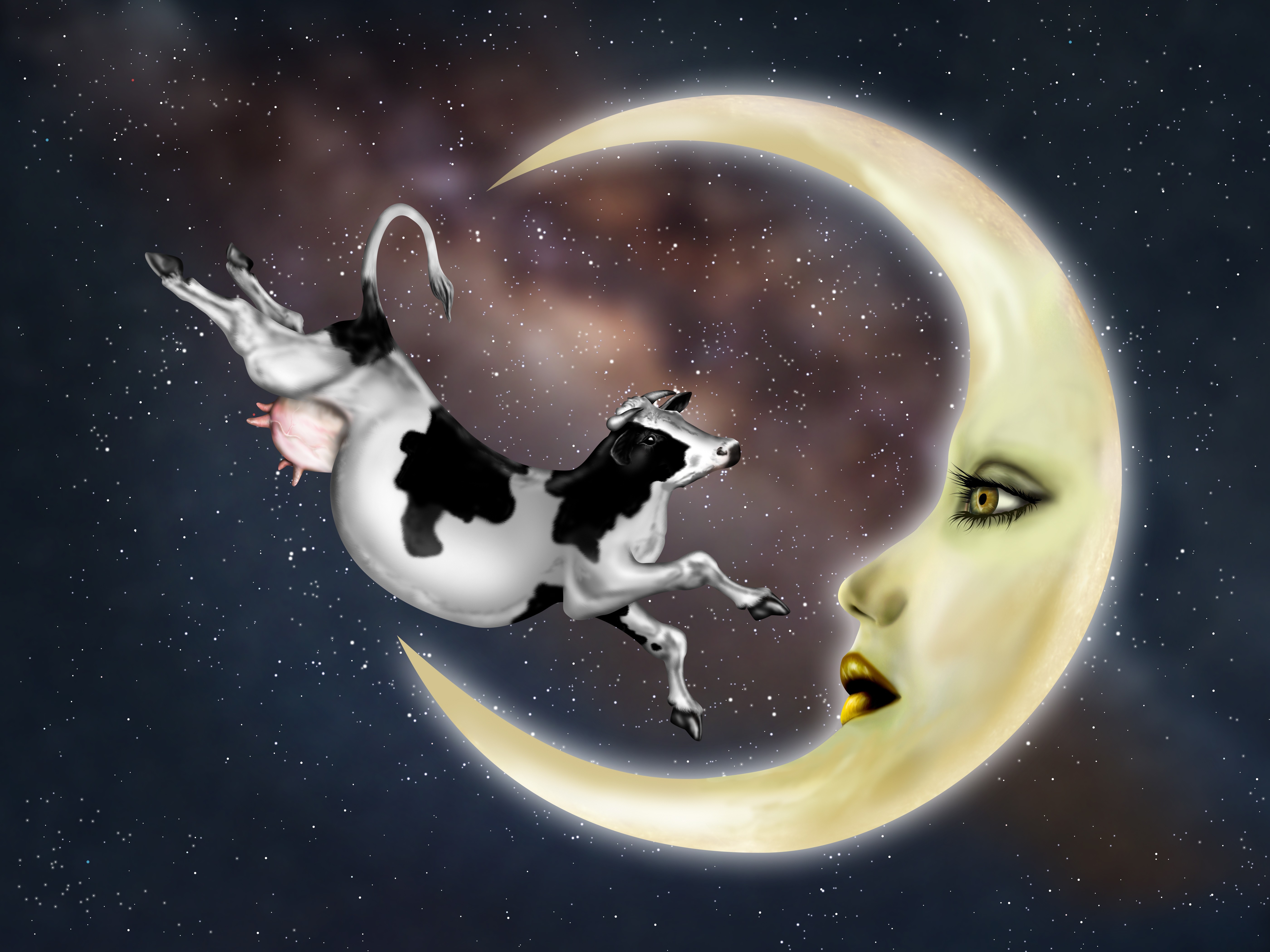 The Sanskrit word for war, gavisti, literally means: a desire for more cows.

Seeing as how we are quickly approaching the end of another year (and my, 2021 did fly by), as well as the final months of the Chinese Year of the Ox, and as we recently witnessed the longest partial lunar eclipse in over five hundred years, it led me on a particular realm of thought.

That is on the greatly influential attributes and historical nature of cattle worship and mythological deities that are prominently associated with both cows and bulls. Our galaxy, known to us as the Milky Way, is stated as such due to its appearance like a ribbon of milk splashed across the night’s sky. Likewise, the word galaxy is associated with lactose, or milk, and we always hear about the damn cow who jumped over the moon! I think it’s time we got to the bottom of this perplexing quandary!

Cows are considered sacred in many world religions (Holy Cow!), and so much so in India that it is prohibited from eating cattle all together, lest it hinder your chances at optimal reincarnation. In ancient Egypt, the god Ptah was the patron of craftsmen and architects, and associated with the Apis bull, the most sacred animal in all of Egypt. Cows were connected with fertility and motherhood in Egyptian mythos. One of several creation myths state that a cow goddess, Mehet-Weret, who represented the primeval waters that existed before creation, gave birth to the sun at the beginning of time.

The sky was sometimes envisioned as a goddess in the form of a cow, and several goddesses, including Hathor, Nut, and Neith, were equated with this celestial cow. Hathor, mother and consort to the sky god Horus and the sun god Ra, was often depicted as a cow, symbolizing her maternal and celestial aspect, although her most common form was a woman wearing a headdress of cow horns and a sun disk.

Historically, horns of the bull, and thus cattle in general, have been associated with solar and lunar cycles, among other representations. Horns and the moon are from time immemorial also associated with the shape of the sickle. In historical times such as ancient Mesopotamia, the moon and the cow were associated with sacred rites of fertility. The stone engraving, known as the Venus of Laussel, is dated at about 12,000 B.C. and found at the entrance to a now famous cave. The female figure holds in her right hand the bison horn, that also represents a crescent moon, which is engraved with marks referring to the lunar month. With the left hand Venus indicates her belly, but her gaze is turned towards the crescent moon, perhaps indicating pregnancy, given the correspondence between the phases of the moon and menstruation of the woman.

The word lunar, itself, means “crescent”. We mention the Venus of Laussel here to highlight the fact that lunar cycles and the veneration of cattle, bison, bulls (and horns) are a very ancient belief system and tradition which predates the religions of ancient Egypt and Sumer by several thousands years, if not tens of thousands. The oldest lunar calendar dates back to about 8000 B.C. while some scholars argue that there is evidence for lunar calendars being in use as far back as 17,000 B.C. in the cave paintings at Lascaux, or even earlier around 30,000 B.C.

Likewise, the veneration of horned animals, including oxen and bulls, dates back at least 10,000 years, and most notably around 13,000 B.C. with the enigmatic cave painting known as The Sorcerer, located at ‘The Sanctuary’ at the Cave of the Trois-Freres, Ariege, France. Our ancient ancestors understood and respected the regenerative nature of horned animals, and how this related to the seasons and natural cycles of death and rebirth, as well as lunar/solar activity. Needless to say, there are dozens of religious deities and icons going back thousands of years, represented as being horned, or associated with the celestial cow and both lunar and solar energies.

But this isn’t an essay, this is merely a blog post that wanted to address a certain issue. The domestication and corresponding animal husbandry of cattle is believed to have taken place in three phases, the first of which started around 10,500 B.C., along with the advent and widespread usage of agriculture, and the early villages which eventually emerged due to roaming bands of migrating farmers. As domesticated animals go, cattle are among the earliest, perhaps because of the multitude of useful products they provide humans: food products such as milk, blood, fat, and meat; secondary products such as clothing and tools manufactured from hair, hides, horns, hooves and bones; dung for fuel; as well as load-bearers for pulling plows. Culturally, cattle are banked resources which can provide bride-wealth and trade as well as rituals such as feasting and sacrifices.

The Persian cult of the solar god Mithras, later adopted by Roman soldiers, is famous for the sacrifice of a bull for its fertility and agricultural rituals. In Judeo-Christianity we have the tale of the “golden calf” as well as the Canaanite ritual sacrifices to the cow god of war and agriculture known as Baal. Cows are among the very first domesticated animals, as well as those creatures bred and cared for as a “renewable resource”, and one of the oldest icons of mythology.

Likewise, a popular belief that there is a higher number of births around the full moon has been shown to be true for dairy cows by a group of the University of Tokyo researchers. It appears that there are numerous reasons behind the association of cattle, to that of lunar activity, going back at least 10,000 years. But to answer the age old questions of just WHY the cow jumped over the moon, we must consider the fact that cats are just extremely bad at playing the fiddle, and caused such a fright and startle in the cow, that it launched itself 225,000 miles away just to escape the terrible noise!

Hey diddle diddle the cat and the fiddle

the cow jumped over the Moon

the little dog laughed to see such fun and…

the dish ran away with the spoon.